Skip to content
Back to top Back to Exhibitions«
Benny Andrews: The Bicentennial Series 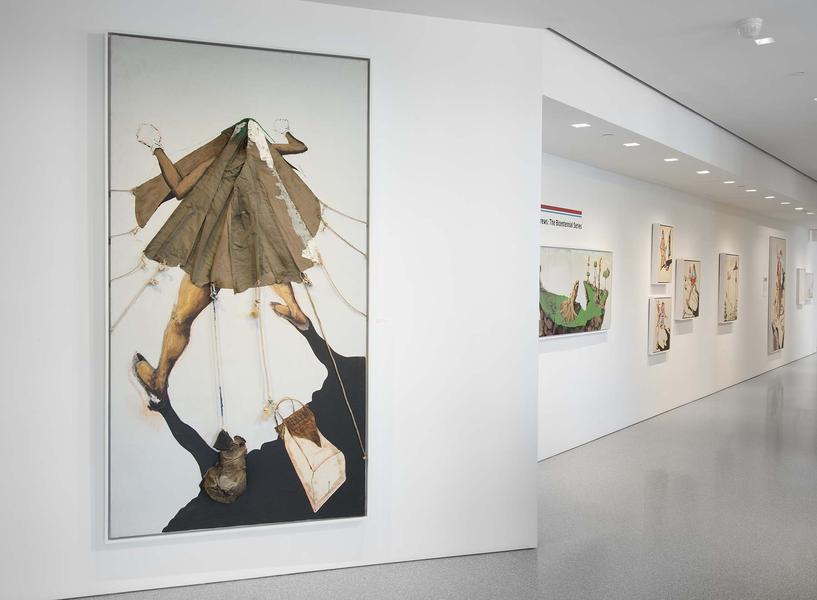 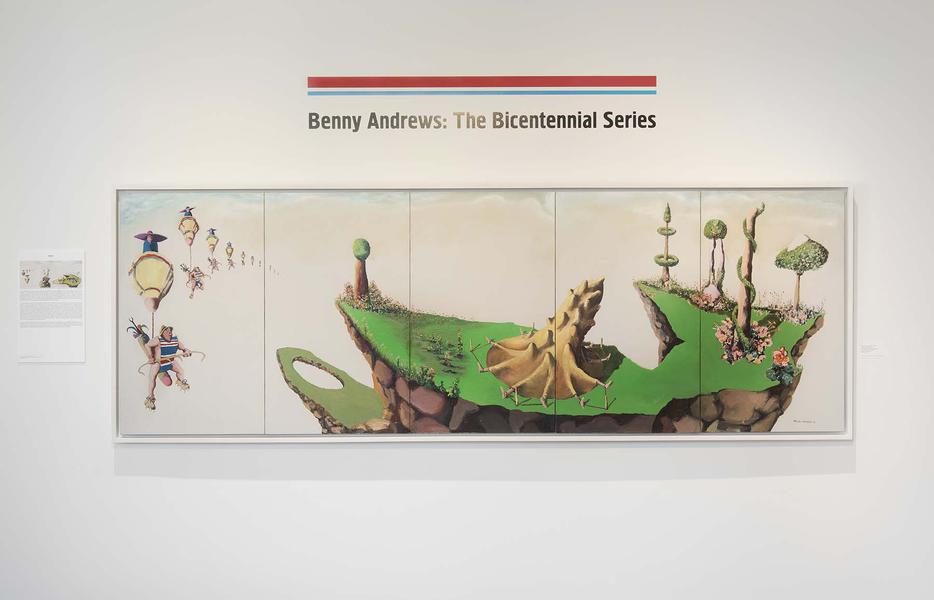 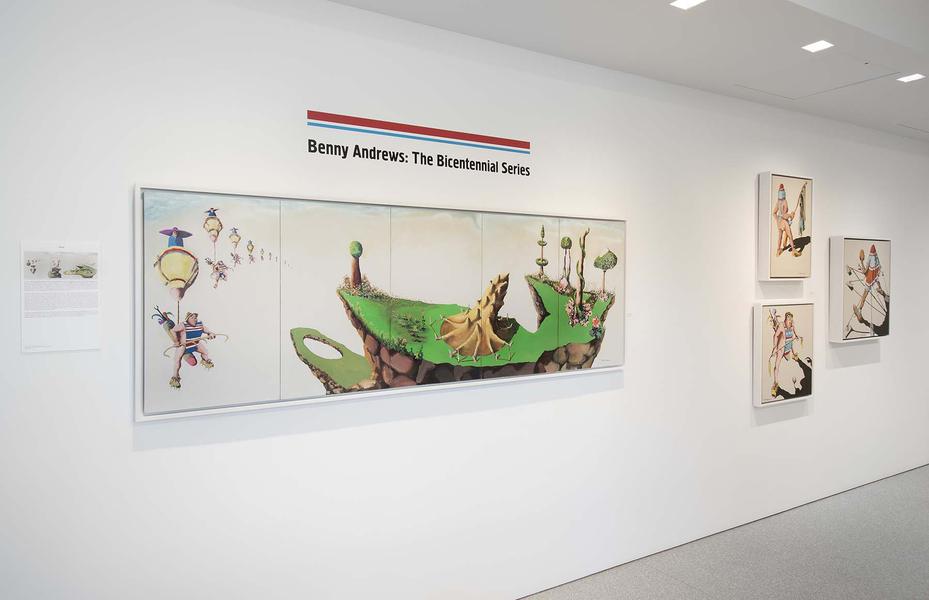 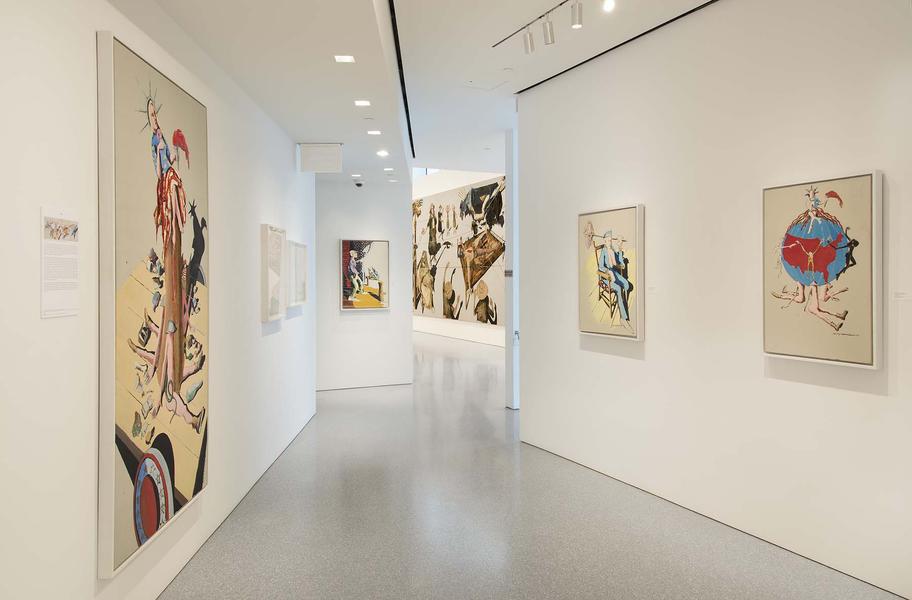 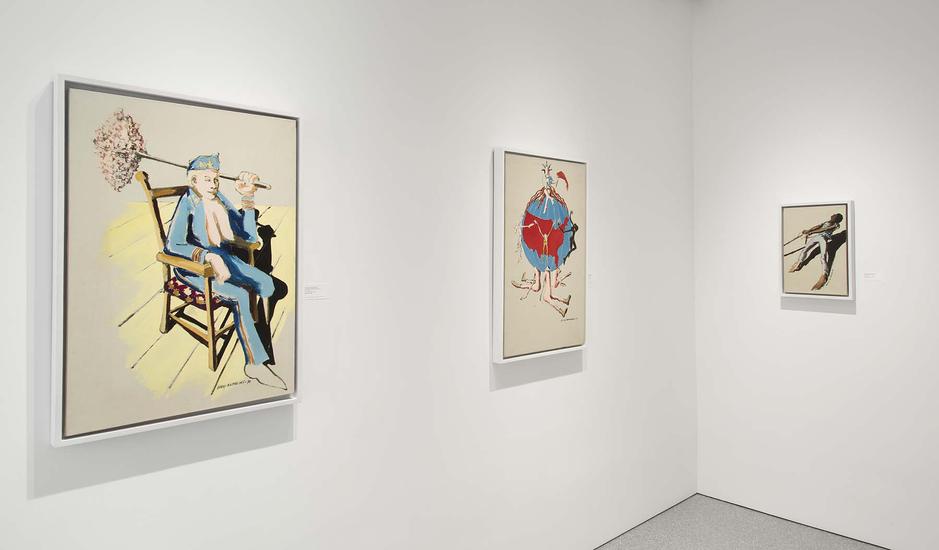 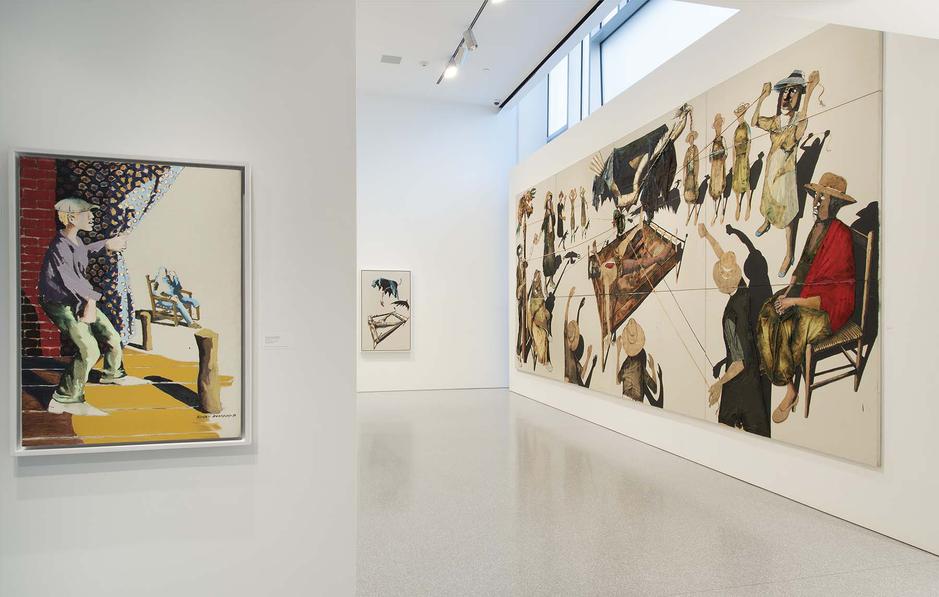 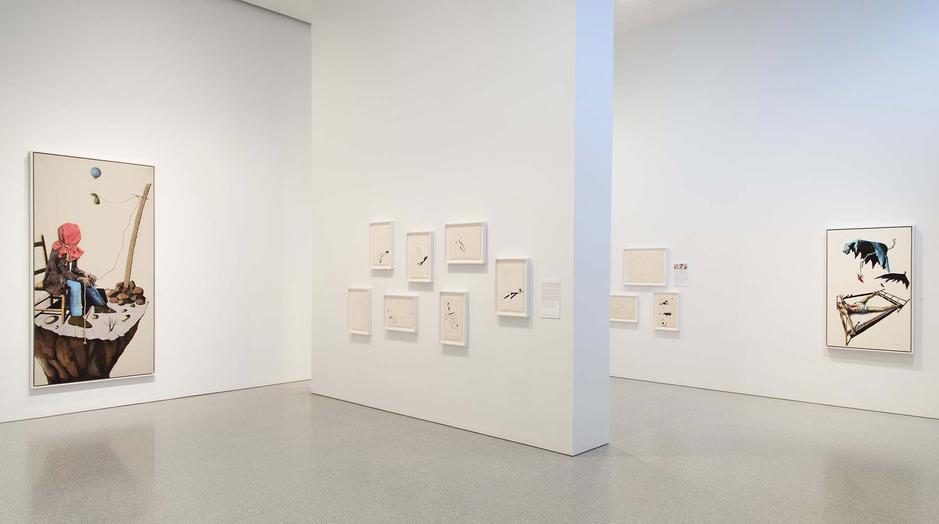 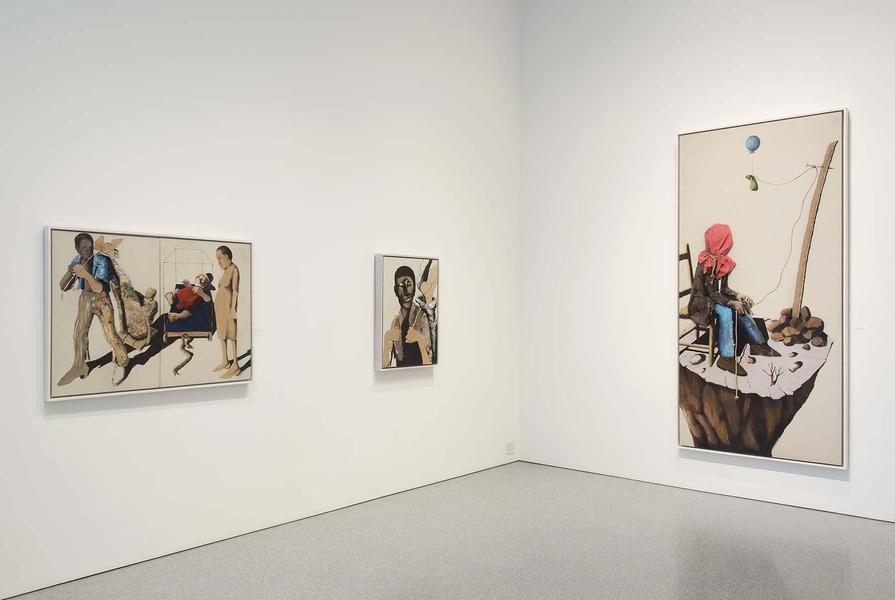 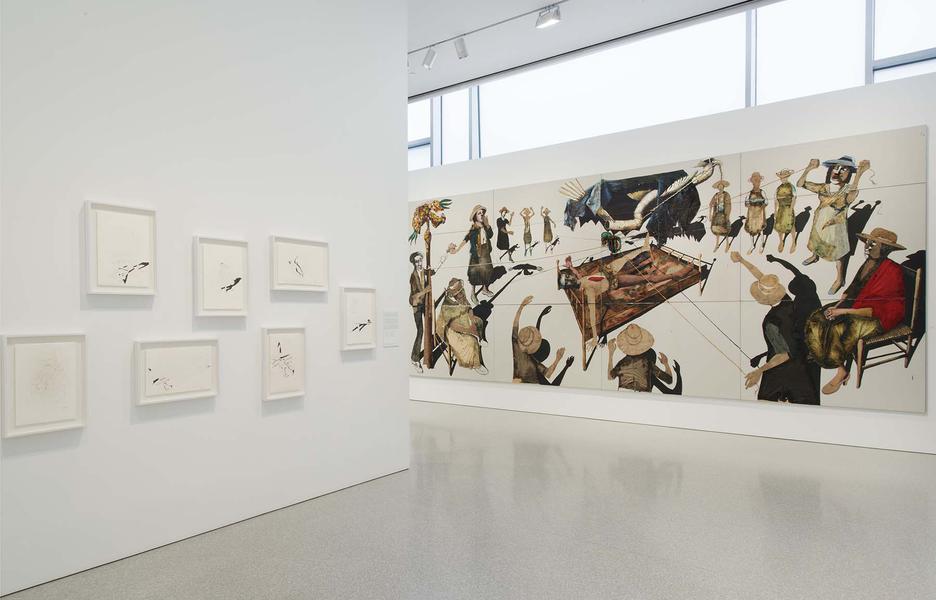 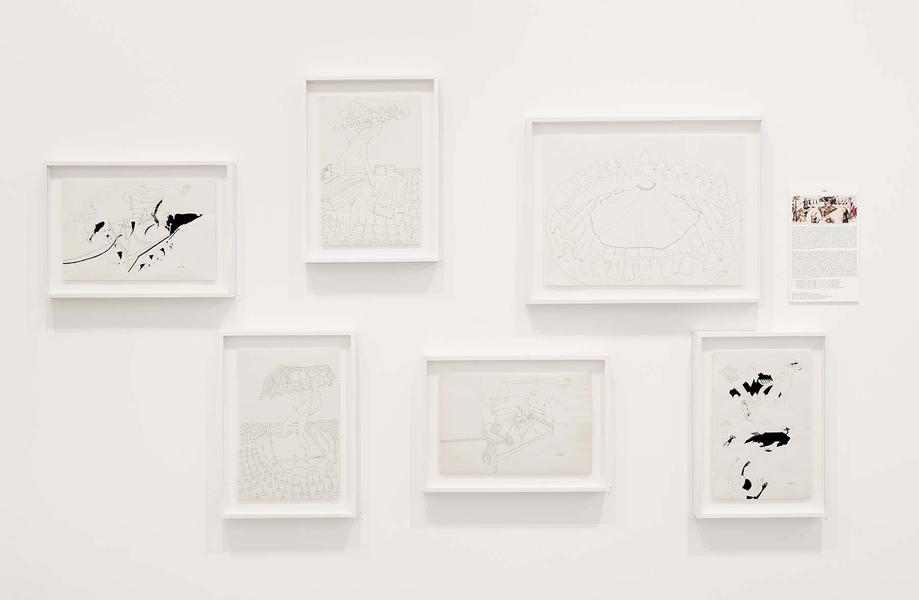 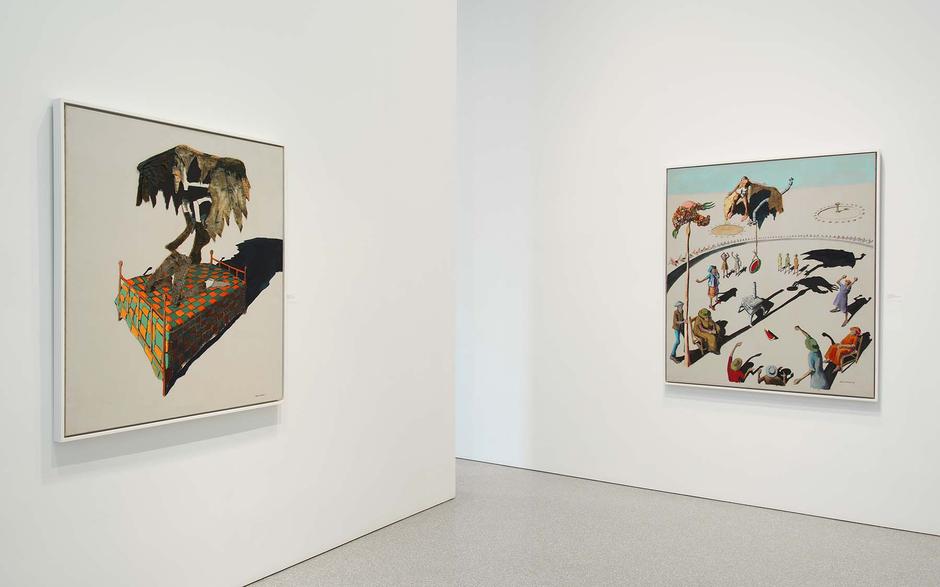 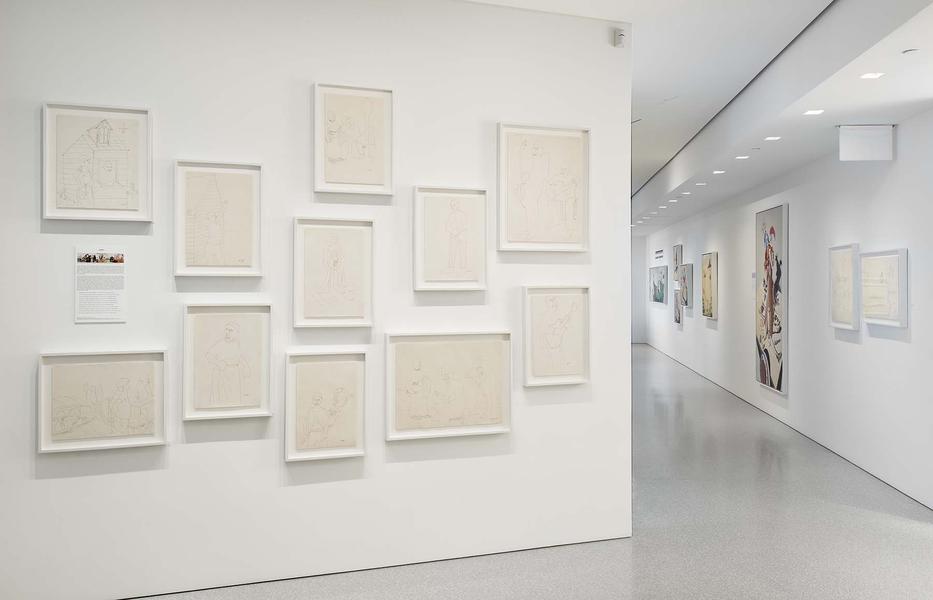 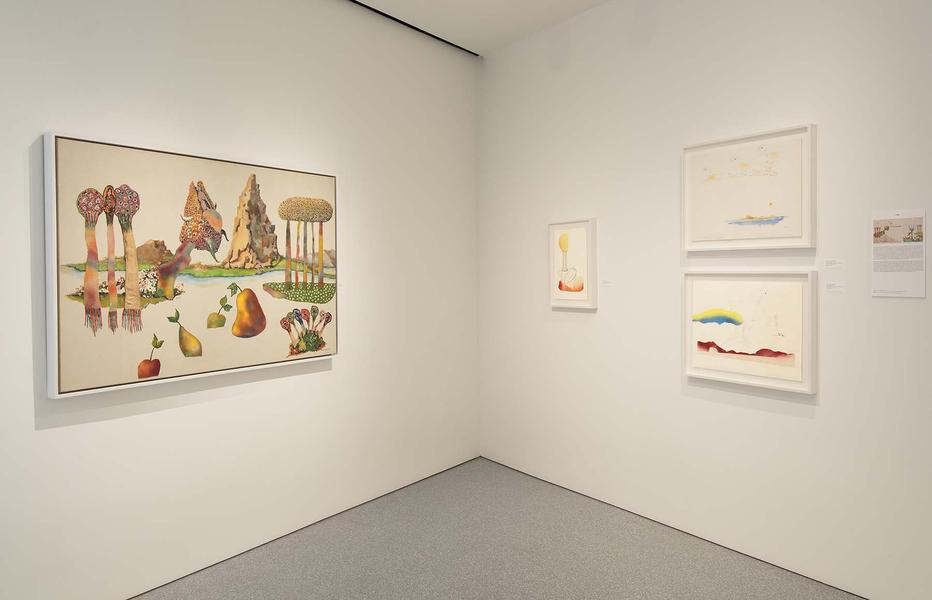 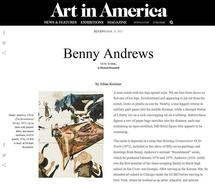 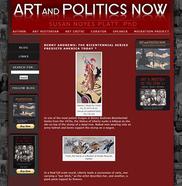 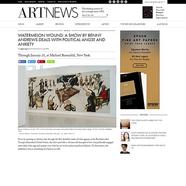 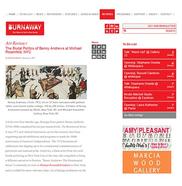 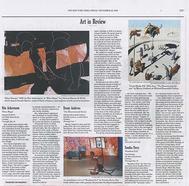 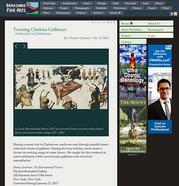 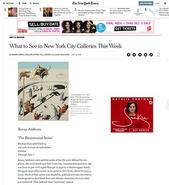 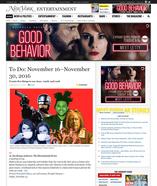 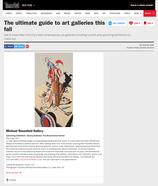 (New York-October 28, 2016) To coincide with the presidential election, Michael Rosenfeld Gallery presents Benny Andrews: The Bicentennial Series – the gallery’s second solo exhibition featuring the work of Benny Andrews (American, 1930-2006). This exhibition will consist of paintings and drawings from all six individual subseries – Symbols, Trash, Circle, Sexism, War and Utopia - which in their totality comprise The Bicentennial Series.

Completed between 1970 to 1975, The Bicentennial Series was conceived to reveal one Black American's view of the United States at a time when the country was celebrating a milestone and feeling nostalgic. Fearing that black Americans would be invisible from all Bicentennial narratives and celebrations, Benny Andrews devoted himself to sharing his “feelings and impressions of this place–America.” By completing six distinctive groups of works (monumental-scale paintings and drawings) with themes that include southern rituals, oppression, justice/injustice, incarceration, regeneration, war, inequality, technology, feminism, motherhood, the absence of humanity, fantasy and idealized beauty, Andrews raised a consciousness. Holding deeply to his southern roots and masterfully crafting timeless allegories, Andrews revealed American truths that are today as relevant as they were 40 years ago.

This exhibition will be the first opportunity to see work from all six subseries together; the majority of works have never been exhibited publicly. The exhibition is accompanied by a fully illustrated color catalogue with an essay by Pellom McDaniels III, Ph.D., Curator of African American collections in the Stuart A. Rose Manuscripts, Archives and Rare Books Library at Emory University in Atlanta, Georgia.  In his essay, McDaniels writes:

The Bicentennial Series provided Andrews a unique opportunity to examine America as he saw it. His overall program included redefining the position of black artists within the realm of contemporary art while advancing an understanding of people of African descent as integral to the history of the United States. Indeed, in the post-civil-rights era of the 1970s, whereby black people had achieved the designated outcome of full-citizenship rights through the discourse of social movements, Andrews’s use of art and art production as a tool of resistance and reinforcement of the narratives that mattered to “the folks” is significant. Through his art, Andrews was able to communicate and frame the contributions made by the Black church to ground black communities, the significance of black women to the communities they fostered and cared for, and the vulnerability of the oppressed in an ostensibly democratic system that had been founded in support of white supremacy.

Benny Andrews (1930-2006) was born in rural Georgia and devoted his career to championing African Americans and their stories. In 1948, Andrews graduated from high school and with a 4-H Club scholarship enrolled in Georgia’s Fort Valley State College. He joined the United States Air Force, served in the Korean War, and attained the rank of staff sergeant before receiving an honorable discharge in 1954. With funding from the GI Bill, Andrews enrolled at the School of the Art Institute of Chicago. In 1958, he completed his bachelor of fine arts degree and moved to New York City.

In New York, Andrews lived on Suffolk Street, befriended other Lower East Side figurative expressionists that included Red Grooms, Bob Thompson, Lester Johnson and Nam June Paik, and continued to develop his “rough collage” technique that often combined rugged scraps of paper and cloth with paint on canvas. As Andrews explained, “I started working with collage because I found oil paint so sophisticated, and I didn’t want to lose my sense of rawness.” By the 1960s, Andrews mastered this technique, and in 1962, Bella Fishko invited Andrews to become a member of Forum Gallery, which gave him his first New York solo exhibition. Additional solo exhibitions followed there in 1964 and 1966. In 1965, with funding from a John Hay Whitney Fellowship, Andrews traveled home to Georgia and began working on his Autobiographical Series. In 1971, The Studio Museum in Harlem presented the first works completed of The Bicentennial Series. In 1975, the High Museum of Art in Atlanta presented four subseries from The Bicentennial Series; the exhibition traveled to the Herbert F. Johnson Museum in Ithaca, NY and the National Center of Afro-American Artists in Boston.

A self-described “people’s painter,” Andrews focused on figurative social commentary depicting the struggles, atrocities, and everyday occurrences in the world, but he was not satisfied to use art as a substitute for action. In 1968, he began a career at Queens College, City University of New York, where he was part of the college’s SEEK (Search for Education, Elevation and Knowledge) program, designed to help students from underserved areas prepare for college. In 1969, he became a founding member of the Black Emergency Cultural Coalition (BECC), which formed coalitions with other artists’ groups, protested the exclusion of women and men of color from institutional and historical canons, and advocated for greater representation of black artists, curators, and intellectuals within major museums. Together with Jay Milder, Peter Passuntino, Nicholas Sperakis, Peter Dean, Michael Fauerbach, Bill Barrell, Leonel Gongora, and Ken Bowman, Andrews participates in the founding of the Rhino Horn Group. In 1971, the art classes Andrews had been teaching at the Manhattan Detention Complex (“the Tombs”) became the cornerstone of a major prison art program initiated under the auspices of the BECC that expanded across the country. In 1976, he became the art coordinator for the Inner City Roundtable of Youths (ICRY)—an organization comprised of gang members in the New York metropolitan area who seek to combat youth violence by strengthening urban communities. From 1982 to 1984, he directed the Visual Arts Program, a division of the National Endowment for the Arts (1982-84), and in 1997, Andrews became a member of the National Academy of Design. Shortly before his death in 2006, Andrews was working on a project in the Gulf Coast with children displaced by Hurricane Katrina. In 2002, the Benny Andrews Foundation was established to help emerging artists gain greater recognition and to encourage artists to donate their work to historically black museums. Andrews work is represented in over fifty public collections including the Detroit Institute of Arts, The Metropolitan Museum of Art (NY), The Museum of Modern Art (NY), Smithsonian American Art Museum (Washington, DC), The Studio Museum in Harlem (NY), and the Wadsworth Atheneum Museum of Art (Hartford, CT).

Michael Rosenfeld Gallery represents the Estate of Benny Andrews and this exhibition has been organized with their cooperation.