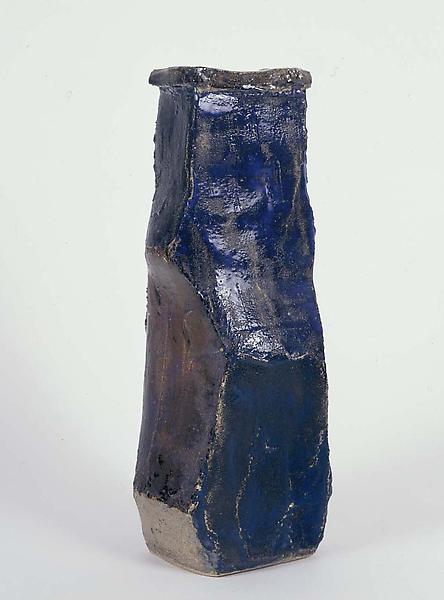 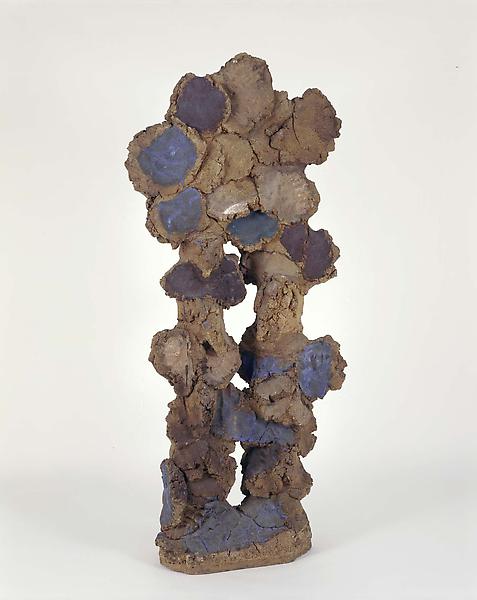 “I have always had more ideas than I could ever execute in clay, and they continue to come, even today.  I realized very early in my experience with clay: Here was an endless story.  The challenges and surprises remain constant.” *

A pioneering ceramicist affiliated with the Otis Clay Group and a student of Peter Voulkos, John Mason was born in 1927, in Madrid, Nebraska. When he was a child, his family moved to Nevada, and the color palette and texture of the Nevada desert had an important impact on his work as an adult. At the age of twenty-two, Mason moved to California. He attended the Los Angeles County Art Institute (now Otis) from 1949 to 1952 and the Chouinard Art Institute from 1953 to 1954. In 1955, he returned to Otis, and met Voulkos, who had been hired while he was away. Voulkos, who ran his classroom like a studio, working alongside his students and allowing them room for individual exploration, had a tremendous influence on Mason, and the two artists became friends. From 1955 to 1957, Mason held a job designing ceramic dinnerware for the Vernon Kilns in LA. During this time, his own work diverged from the scale and functionality of the flatware he designed to support himself. Mason began creating large-scale towers and wall reliefs whose size and texture echoed the monumentality and gestural brushstrokes of abstract expressionist painting.

In the 1960s, Mason began to turn away from the raw expressiveness of these works and towards a smoother, more geometric designs rooted in chiastic and cruciform shapes. Mason’s work also increased in size, which led him to question ceramics as an appropriate medium for what he wanted to achieve. The properties of damp clay and the requirement that the works be fired impeded Mason’s ideas, and in the early 1970s, he turned to commercially manufactured firebricks as the primary material for his artwork. “Stacked and arranged in geometric formations, these modular units allowed him to create large scale, conceptual sculptures with a precision and speed impossible with traditional ceramic techniques. Moreover, the use of these industrial modules eliminated all traces of personal touch, resulting in anonymous, abstract works whose plans were predicated on elaborating simple ideas of symmetry—translation, rotation, and reflection.” †

Mason returned to ceramics in the 1980s, creating objects with traces of the functional as well as non-functional sculpture. His interest in geometric abstraction persisted, and Mason began to twist the rigid lines of the geometric, creating a series of vessels entitled Torque. This motif of the “large, four sided vessel whose geometric shape was given a distinctive contropposto, axial twist” enabled Mason to delve into questions of formal purity and abstraction. As much as he explores the question of the three-dimensional shape, Mason is also preoccupied with texture and surface. “In his early work, the incredibly tactile surfaces were always balanced by the huge scale of his pieces to create a unified force in space. The surfaces of [later] sculptures glow with an inner light, which only intensifies the dimensional movement of the pieces. The sculptures are fired in earth tones that reflect the source of their medium, yet it still gives them a transcendent aura.”‡