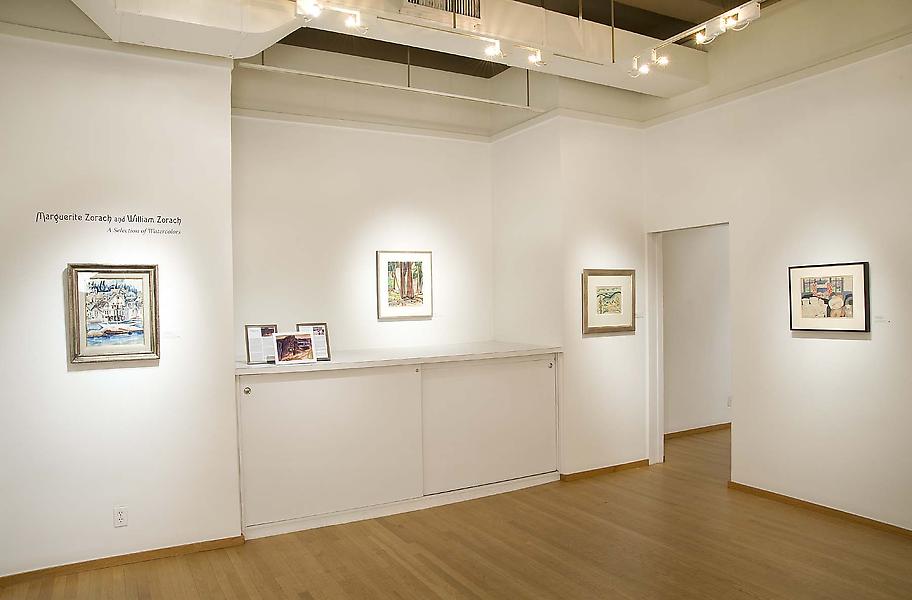 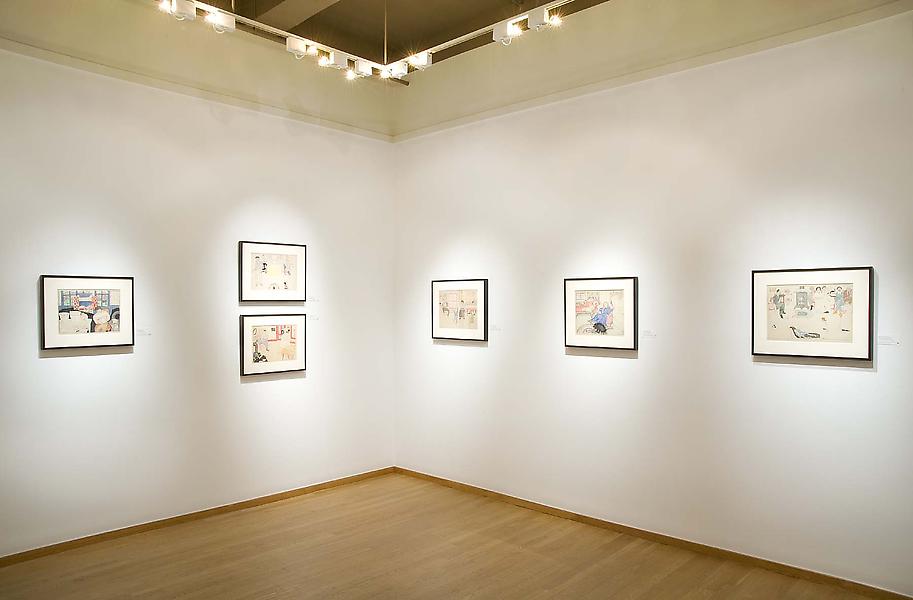 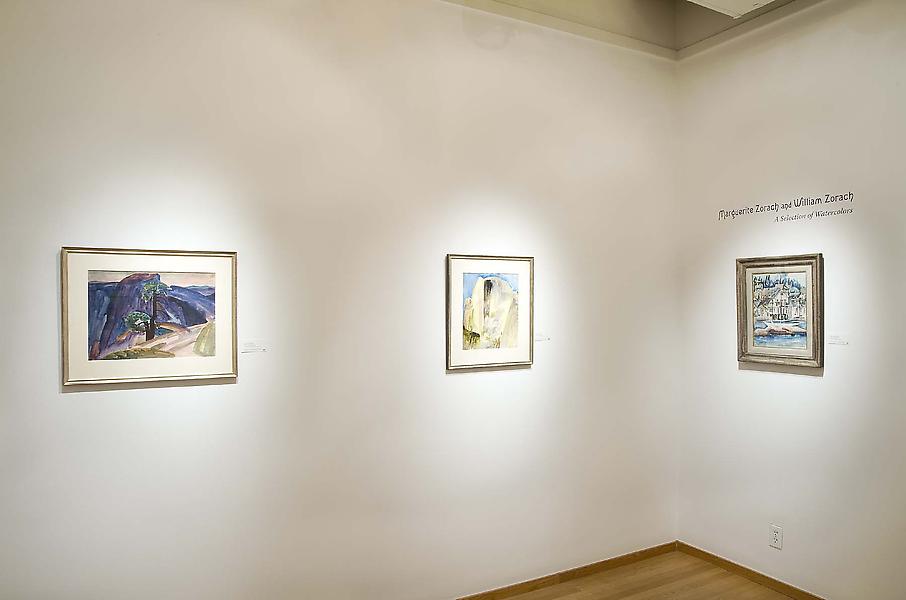 (New York City, June 4, 2010)— Michael Rosenfeld Gallery is pleased to present its first solo exhibition featuring the work of Marguerite Zorach (1887-1968) and William Zorach (1887-1966). On view from June 4 to August 13, this exhibition consists of a selection of watercolors by each.

The six 1915 watercolors by Marguerite Zorach were completed during a summer excursion in 1915 to the White Mountains hamlet of Randolph, New Hampshire. A noticeable feature in these works is the attention to detail, everything from the furniture in the rooms to the patterning of the wallpaper and the design of the rugs. In general the works display the modernist conventions of simplification of form and dramatic flattening of perspective. Later Zorach turned five of the six original watercolors into a set of hand-watercolored transfer lithographs. The original watercolors were purchased by Abby Aldrich Rockefeller from the Downtown Gallery and in 1935, Mrs. Rockefeller donated them to the Museum of Modern Art (MoMA). MoMA recently de-accessioned these works and Michael Rosenfeld Gallery acquired them.

The five watercolor examples by William Zorach reflect his love of nature and his years of travel. Several works were completed while traveling in the summer of 1920 in Yosemite National Park, where with the panorama of the Sierra Nevada range around him he befriended photographer Ansel Adams. The other watercolor paintings capture Stonington Harbor, Maine and Chappaqua, New York. A painter and sculptor, William enjoyed most the spontaneity of watercolor, believing that the flow and quick application of watercolor was like writing poetry; he also believed that the medium offered him an opportunity for reflection.

Born in 1887 in Santa Rosa, California, Marguerite Thompson Zorach often referred to as the "first woman artist of California" was raised in Fresno. In 1908, she traveled to Paris to study art, arriving in time for the Salon d’Automne, where the bold compositions of postimpressionist painters and fauvists such as Henri Matisse, André Derain, and Maurice de Vlaminck amazed her. Zorach soon became a disciple of modernism and regularly attended the salons held by Gertrude Stein and Alice Toklas. She studied briefly at the Académie de la Grande Chaumière. In 1911, she enrolled at the Académie de la Palette, taking courses with Jacques-Emile Blanche and John Duncan Fergusson. At La Palette, Thompson met many of the early modernists including her future husband, William Zorach. In July of 1912, Marguerite returned to Fresno and spent six weeks in the Sierra Nevada mountain range, where she created works with a fauvist palette. She and William Zorach were married after his arrival to New York City that same year, settling in Greenwich Village. Naming their residence the “Post-Impressionistic studio”, the Zorachs would frequently exhibit their work at their home. Although both artist lacked gallery representation, they participated in the 1913 Armory Show, and from 1915 to 1918, they both also exhibited regularly at the Daniel Gallery.

Even though her work was frequently shown alongside that of her husband, Marguerite Zorach remained an independent artist from her husband. In 1916, she was the only woman to be included in critic Willard Huntington Wright’s Forum Exhibition of Modern American Painters. She was a member of the Society of Independent Artists, a founding member and the first president of the New York Society of Women Artists, and active in the Salon of America. In the 1917 exhibition of the Society of Independent Artists, Zorach showed an

embroidered tapestry rug alongside her oil paintings. Afterwards, she began to work extensively in tapestry. Knowing that her tapestries risked being dismissed as craft, Zorach made a point of referring to these works as “modernistic pictures done in wool” In 1923, the Montross Gallery mounted her first solo exhibition of her modernist pictures in wool, Embroidered Tapestries by Marguerite Zorach. That same year, she purchased a farmhouse in Robinhood, Maine on Georgetown Island and began a series of lithographs that were based on scenes of her family life with William and their children. In the 1930s, she returned to painting and continued to create and exhibit artwork until her death in June 1968.

One of the first artists in the United States to employ the sculptural technique of direct carving, William Zorach was born Zorach Samovich in Eurberick (now Jurbarkas), Lithuania in 1889. When he was a child, his family emigrated to the United States, settling in 1891 in Cleveland and changing the family name to Finkelstein. In grammar school, Zorach’s name underwent a second transformation when his teacher dubbed him William. Zorach’s parents struggled to feed their ten children, and when he was a teenager, Zorach dropped out of school to work for a commercial lithography firm, while taking night classes at the Cleveland Art School. In 1908, Zorach left Cleveland for New York City and enrolled in courses at the National Academy of Design. Two years later, he traveled to Paris, where he studied at the cutting-edge Académie de la Palette with John Duncan Fergusson and Jacques-Emile Blanche and met Marguerite Thompson, an American artist who had been in Paris since 1908. In 1911, Zorach participated in the Salon d’Automne, and the following year, the couple moved back to the United States.