Skip to content
Back to top Back to Exhibitions«
Irving Norman: War & Peace
Monumental Paintings, 1969-1986 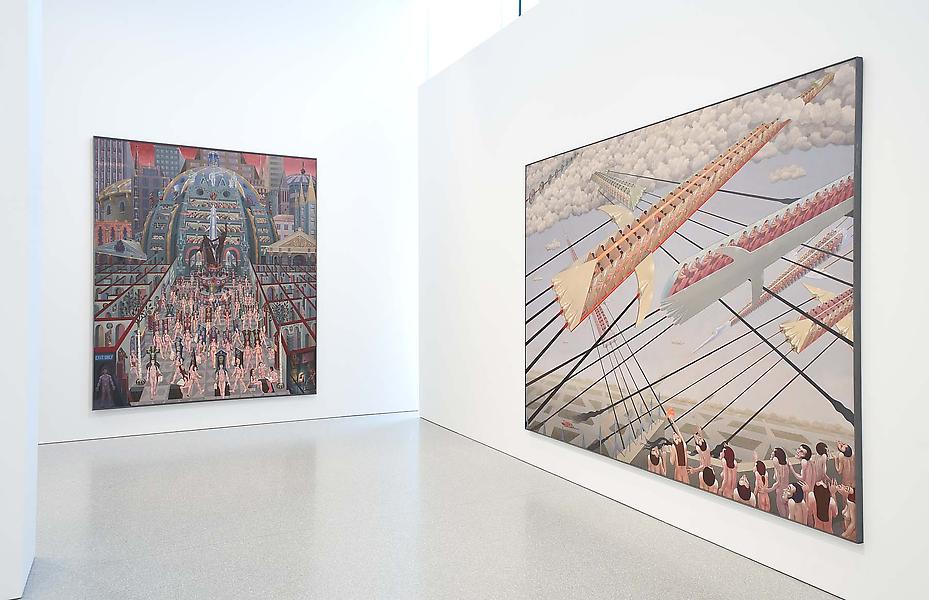 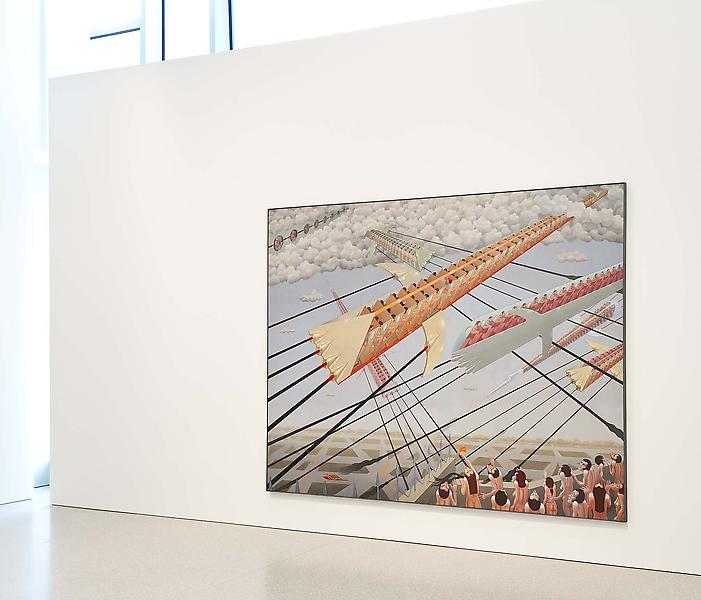 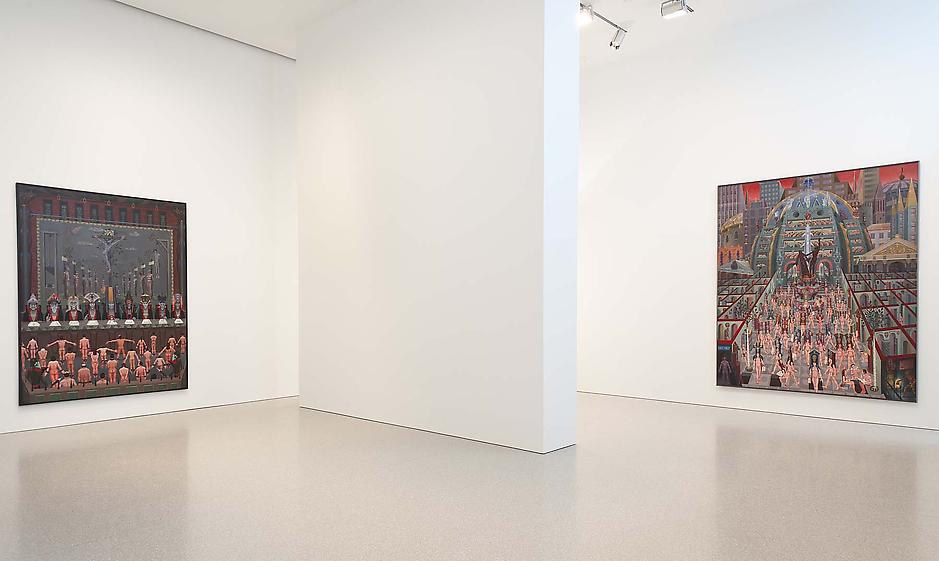 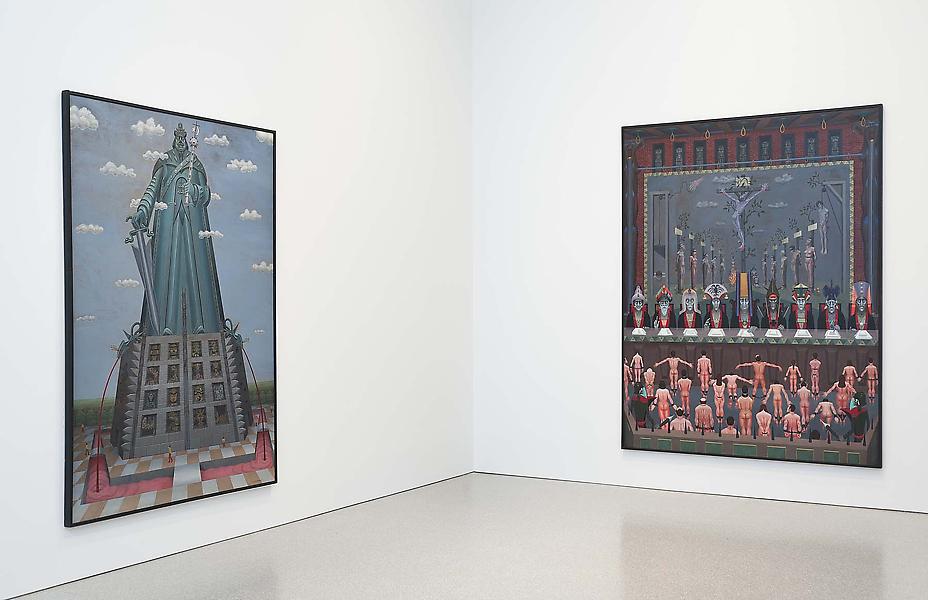 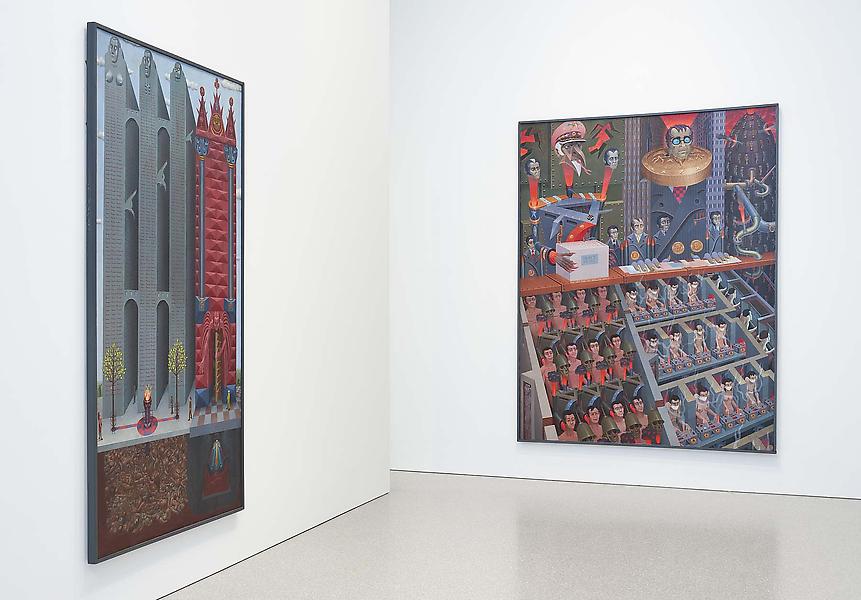 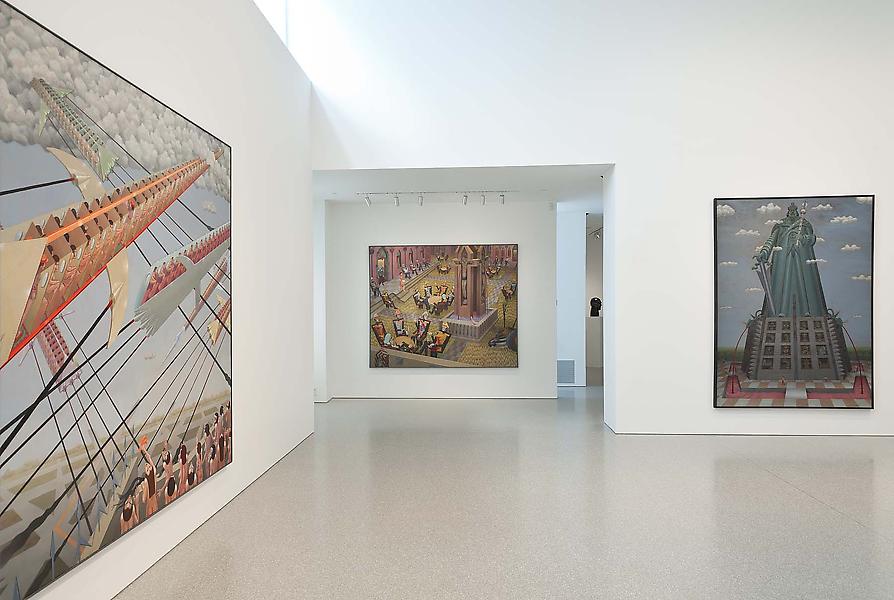 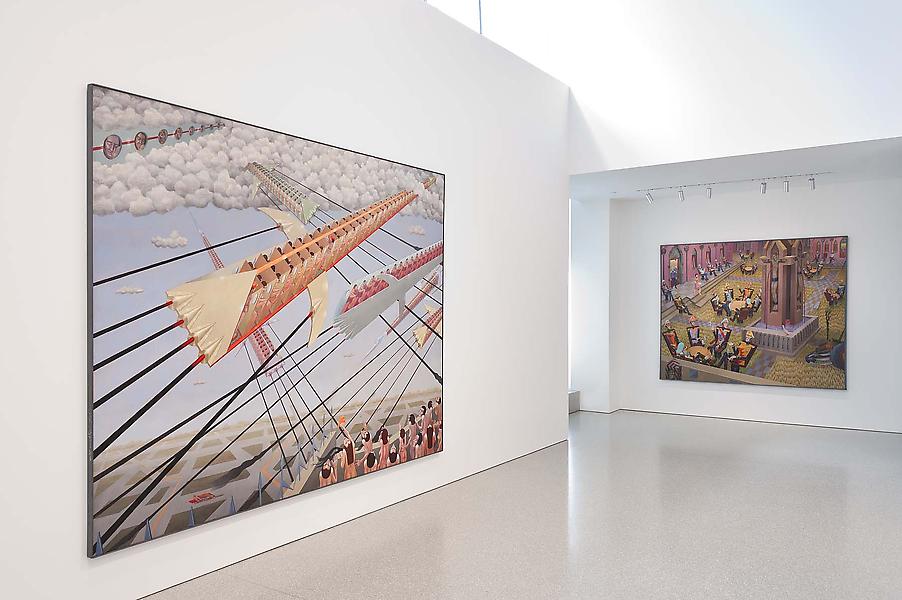 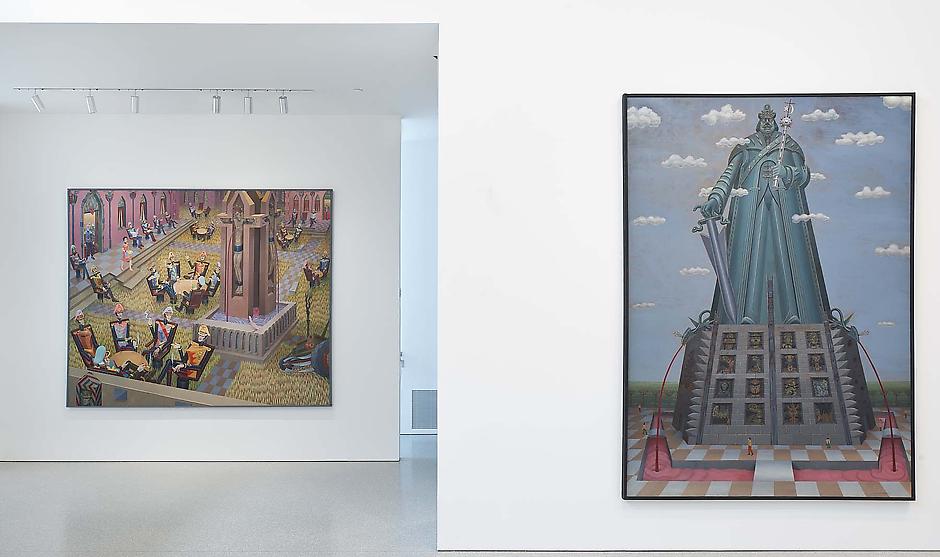 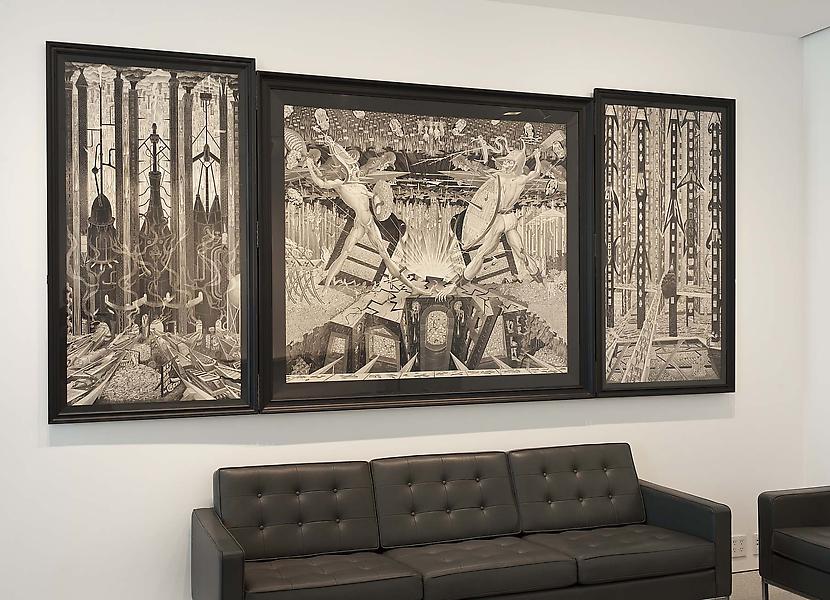 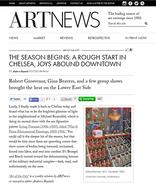 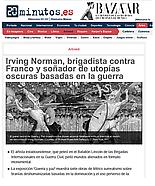 (New York—August 12, 2014) Michael Rosenfeld Gallery is pleased to present Irving Norman: War & Peace—Monumental Paintings, 1969-1986, an exhibition of seven large-scale paintings and one drawing created by one of the twentieth century’s most talented and outspoken critics of war and other forms of injustice. The exhibition will be on view from September 6 to October 25, and a reception on the evening of September 6 is open to the public.

The second solo exhibition of Norman’s art mounted by Michael Rosenfeld Gallery, Irving Norman: War & Peace takes its title from a masterwork (included in the exhibition) that marks a pivotal moment in Norman’s development. Executed in graphite in 1965, War and Peace is a large-scale triptych drawing depicting two colossal archaic warriors who confront each other in battle while the world around and beneath them crumbles. Although Norman later translated War and Peace into paint on canvas, the drawing stands as a completed work on its own. A culmination of Norman’s visual and thematic ideas from earlier decades, War and Peace brings together many of the central themes that would dominate his art in the following decades: “the horrors of war; the exploitation of the many by a few; the oppressive, dehumanizing urban environment; and the consequences of technology,” and it does so with Norman’s characteristic cleverness and mastery of the art historical canon. While the bodies of the warriors recall classical portrayals of war as heroic, Norman’s painting critiques precisely that valorization by focusing on the gruesome and far-reaching devastation of such violence. Furthermore, as Patricia Junker notes, “The central panel emphasizes the persistence of primitive forms of combat, yet the left-hand panel of the triptych makes it clear that the engine of war is fueled by technology. The right-hand panel reveals human exploitation at the hands of big business—a dubious ‘peace.’” War, Norman reveals, brings multiple forms of destruction, including fear, displacement, and a growing disparity between rich and poor.

Norman’s recurring interest in violence and dispossession has roots in his own biography. Irving Norman was born Irving Noachowitz in 1906 in Vilna, which at the time was under Russia’s control. In 1923, he emigrated to the United States, settling on New York’s Lower East Side before moving to Laguna Beach, California. In 1938, he joined the Abraham Lincoln Battalion of the International Brigade in the Spanish Civil War. After the war, searching for a way to express the atrocities he witnessed, Norman turned to art. He moved to San Francisco in 1940 and attended the California School of Fine Arts. By 1942, Norman had a solo exhibition at the San Francisco Museum of Art. In 1946, he went to New York City and studied with Reginald Marsh and Robert Beverley Hale at the Art Students League before traveling to Mexico to see the murals of Diego Rivera, José Clemente Orozco, and David Alfaro Siqueiros, which had a profound influence on Norman in spirit and style. Working in watercolor at the time, he expanded the medium’s size to monumental proportions. But while he painted on a grand scale, he saw in human terms. In massive works teeming with detail, populated by swarming, anonymous, often nude, clone-like figures, Norman railed against injustice and captured the chaotic alienation of modernity. His forms, generic signifiers of humanness, are constricted by urban life, decimated by poverty, destroyed by war, and trapped by global capitalism. Animated by dynamic, off-kilter compositions and jewel-like colors, Norman’s paintings bear witness to horror, but they often do so with piercing wit.

Norman’s success as a painter during his lifetime seems modest when compared to the celebrity of his contemporaries. During decades overshadowed by pure abstraction, he focused on carefully detailed representational imagery and strong social messages. But his choice to buck dominant artistic trends only partially accounts for the fact that his work today remains marginalized in art historical canons. Much of his earlier obscurity also stemmed from twenty years of surveillance and harassment by the FBI, which was explicit enough to scare curators and collectors away from Norman’s work. However chilling the effect of such scrutiny upon his life, Norman’s paintings stand as a testimony to his talent and determination, and ultimate belief in humanity. While often horrific and terrifying, Norman’s colossal works contain a deeper message of hope. As his complex and detailed depictions of oil wars, corporate greed, religious fanaticism, political corruption, consumerism, and dehumanization of modern architecture only seem to become more relevant as time wears on, so too does his conviction in the capacity human beings have to hope, envision, and strive for a better future.

The exhibition is accompanied by a color catalogue featuring images of the paintings in their entirety as well as in extreme detail. Written contributions to the catalogue include an introduction by Scott A. Shields, Associate Director and Chief Curator at the Crocker Art Museum in Sacramento, California, and a personal recollection of Irving Norman by musician Graham Nash (of Crosby, Stills & Nash), a long-time admirer of Norman’s work.

Michael Rosenfeld Gallery, LLC, is the exclusive representative of the Estate of Irving Norman.