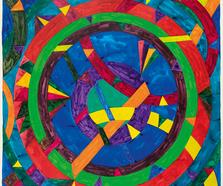 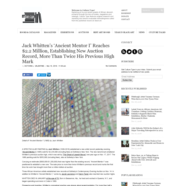 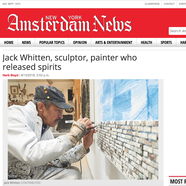 “I maintain that abstraction is a symbol. It's very much like holding a camera. I can direct it toward any symbol that I choose. As a painter, I have to locate that symbol in the paint, as opposed to giving an illustrated narrative. The narrative content and the figure are still in there-they're built into the paint.”[i]

Jack Whitten (1939-2018) was born in Bessemer, Alabama, a steel-mill town and the second largest city in the state. When Whitten was a young child, his father, a coal miner, died and his mother, a seamstress was left to support her children. In contrast to the racism and violence of the Jim Crow South, Whitten grew up in a loving home surrounded by his mother and grandmother, gospel music, books, and a piano, which gave him a sense of stability in what could be a terrifying world. After high school, Whitten initially enrolled in the pre-med program at Tuskegee Institute, winning a work-study scholarship. In 1957, on the heels of the Montgomery bus boycott, Whitten went to hear Martin Luther King, Jr. speak. Afterwards, he had a conversation with the young civil rights leader and joined the movement for non-violent civil disobedience. In 1959, Whitten left Alabama and pre-med to study art at Southern University in Baton Rouge, Louisiana, but he remained involved in the civil rights movement. Whitten organized a civil rights march through Baton Rouge, which he described as a “[h]horrible experience . . . we marched to the state capital, with people throwing shit on you, piss on you, hitting you with pipes and shit, people bleeding. Horrific experience. I will never forget at the steps of the state capital building, praying and people throwing piss out of the offices, bottles and eggs, all kinds of shit.”[ii] By 1960, Whitten was drained of the emotional reserves needed to meet such violence with non-violence and came to the conclusion that he “believed in Dr. King’s philosophies; but . . . found it too difficult to turn the other cheek.”[iii] Whitten left the south and moved to New York City, where he studied at Cooper Union, earning his BFA in 1964.

Whitten arrived in a New York dominated by abstract expressionism, but the curriculum at art schools had yet to fully catch up. Fortunately, he met Willem de Kooning, who functioned as a counter-point to Whitten’s art professors, and he befriended the circle of artists who frequented the Cedar Tavern on University Place. But by the late 1960s, Whitten had grown “tired of [abstract expressionism’s] rhetoric of heroic self-expression. . . In his painting, his brushstrokes had become habitual, complacent.”[iv] In the early 1970s, Whitten, along with Steve Antonakos, Bob Whitman, and Agnes Denis, received one of the first artist residencies sponsored by the Xerox Corporation. He traveled to Rochester and met with Xerox engineers, an experience that gave him the idea that the solution to his gestural problem was to begin making paintings rather than painting them by hand. Whitten developed an approach to painting that was closer conceptually to photography and photocopying. In opposition to abstract expressionism’s absolute faith in the gesture, Whitten tried to eliminate the gesture from art. He began to “process” the paint and canvas by dragging “large troughs of paint . . . across the canvas with tools including squeegees, rakes, and Afro combs. This process yields palpable surface texture, line, and void.”[v] In 1974, his processed works were shown in a solo exhibition at the Whitney Museum of American Art, a full decade before Richter created the squeegeed works that made him famous.

The Whitney show was Whitten’s first solo museum exhibition, but he had been steadily exhibiting before. He was included in the 1969 and 1972 annual exhibitions at the Whitney Museum of American Art, as well as the museum’s 1971 Contemporary Black Artists in America. Solo and group exhibitions continued throughout the 1970s, at Montclair State College, Robert Miller Gallery, the Studio Museum in Harlem, the Metropolitan Museum of Art, and the Phoenix Art Museum. Always searching for a way to make paintings rather than paint them, Whitten devised another new approach in the 1980s. He began casting acrylic paint and compounds and etching and carving shapes into them (possibly influenced by the wood carving he would do to take a break from painting at his summer home in Crete). In casting and carving into paint, Whitten all but eliminated the line between painting and sculpture.

Whitten’s drive to work in the interstices between modes of art-making continually fueled his experimentation with paint. Since the 1990s, he moved painting closer to the direction of collage, a medium he saw as “the keystone of modernist thought.”[vi] Whitten cast paint into tiles using a transparent acrylic medium, a small amount of pigment, and a variety of molds (soda bottle caps, a broken computer mouse, discarded clam shells). He then applied it to canvas, often setting the dry acrylic pieces into a field of wet paint, essentially creating inlaid paintings where the sense of spatial relations is not readily apparent. In this process, the creation of a painting incorporated collage, mosaic work, and sculpture. Whitten liberated himself from art history by incorporating, transforming, and remixing its various components.

While Whitten exhibited at home and abroad throughout his career, there has been a recent resurgence of interest in his work, which has been included in major group shows such as Energy/Experimentation: Black Artists and Abstraction 1964–1980 at The Studio Museum in Harlem (2006); High Times Hard Times: New York Painting 1967–1975, organized by Independent Curators International (2006); Blues for Smoke organized by the Museum of Contemporary Art, Los Angeles, California (2012); Witness: Art and Civil Rights in the Sixties, organized by the Brooklyn Museum (2014); and Soul of a Nation: Art in the Age of Black Power, organized by Tate Modern, London (2017). Recent venues for solo exhibitions have included MoMA PS1, New York (2007); the Atlanta Contemporary Art Center, GA (2008); The Rose Museum at Brandeis University, Waltham, MA (2013); The Met Breuer, the Metropolitan Museum of Art, New York (2018); and Hamburger Bahnhof, Berlin (2019).