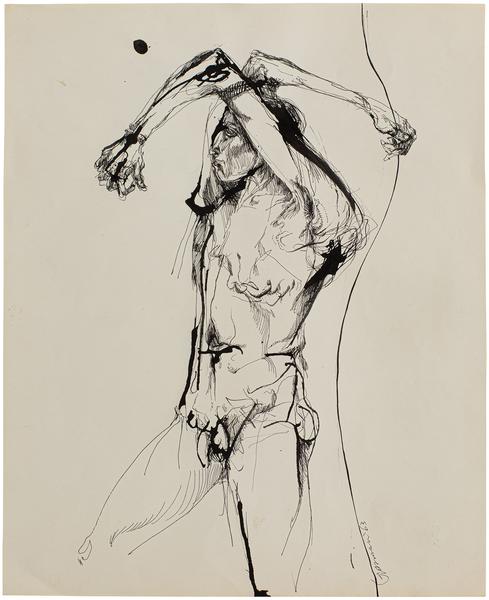 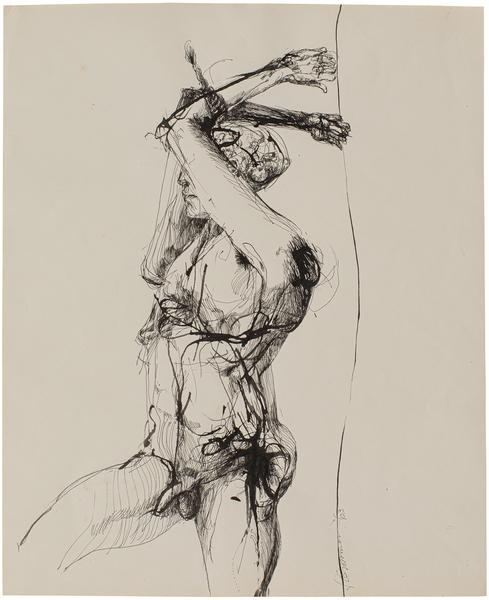 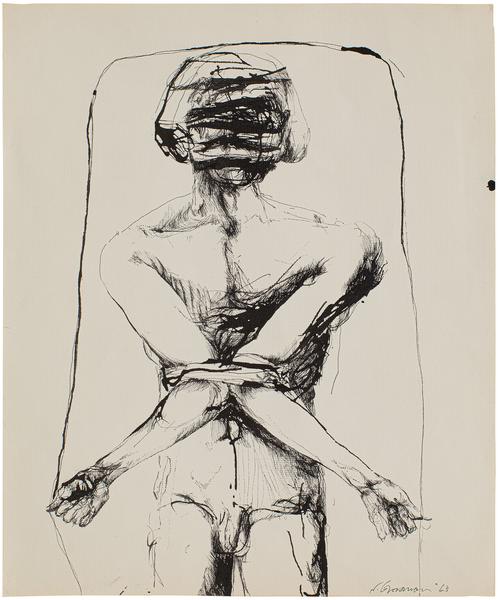 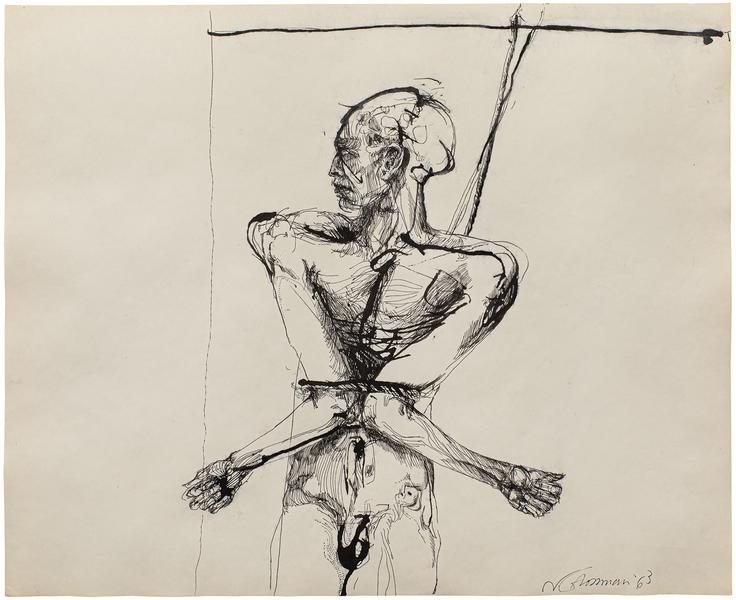 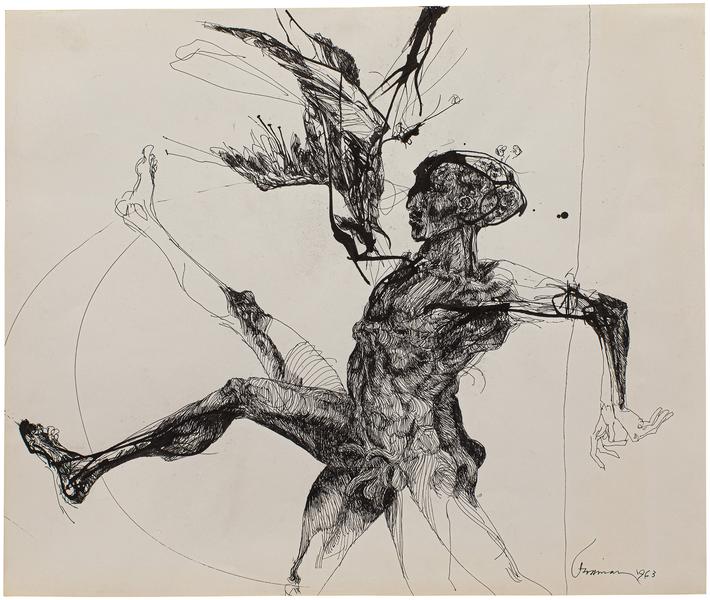 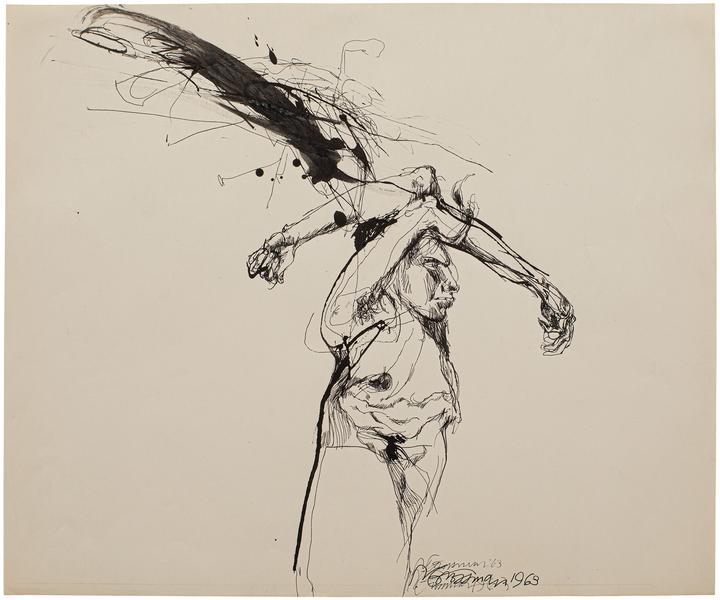 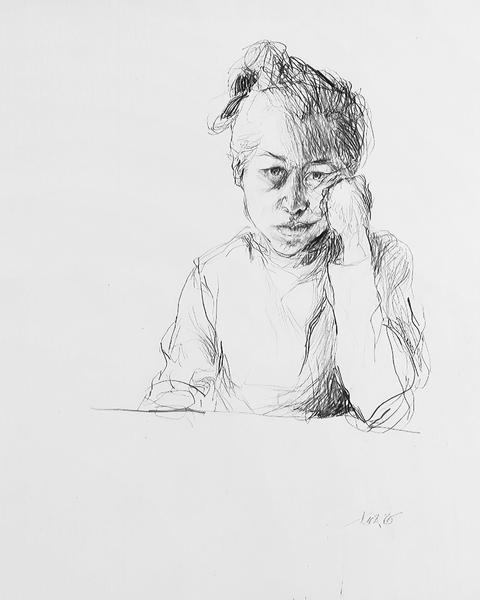 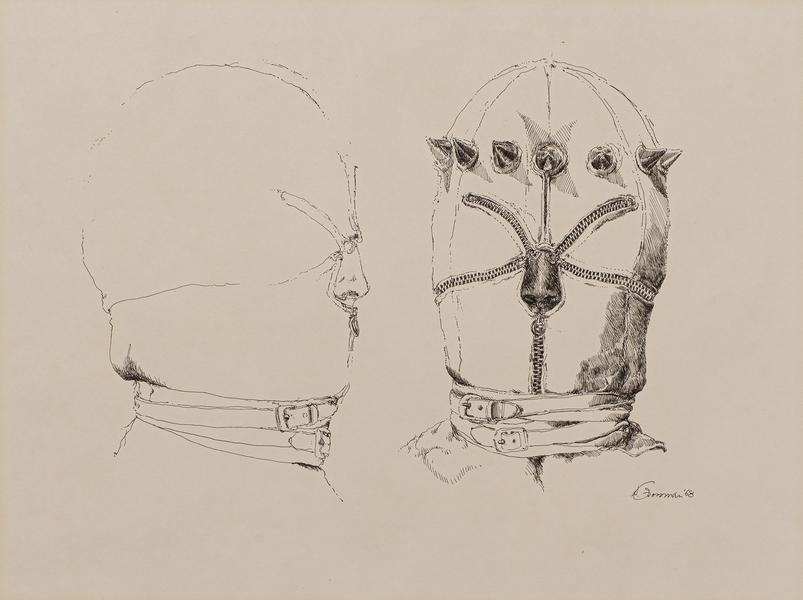 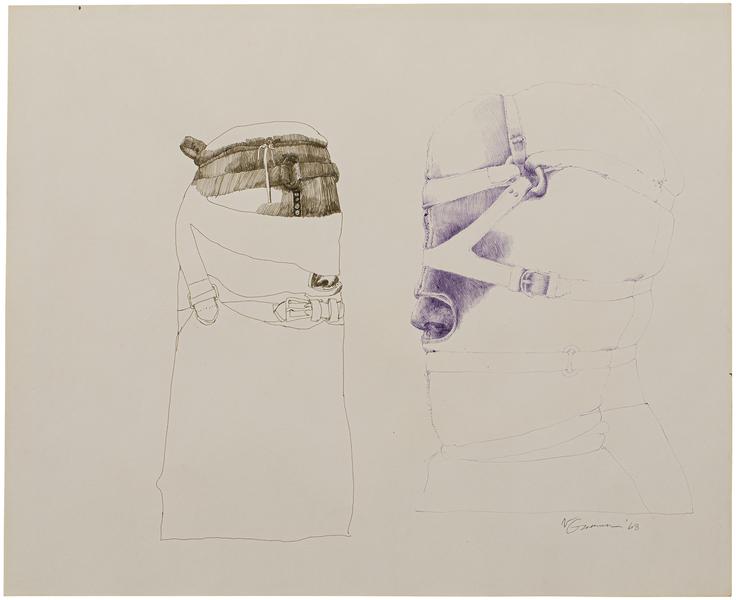 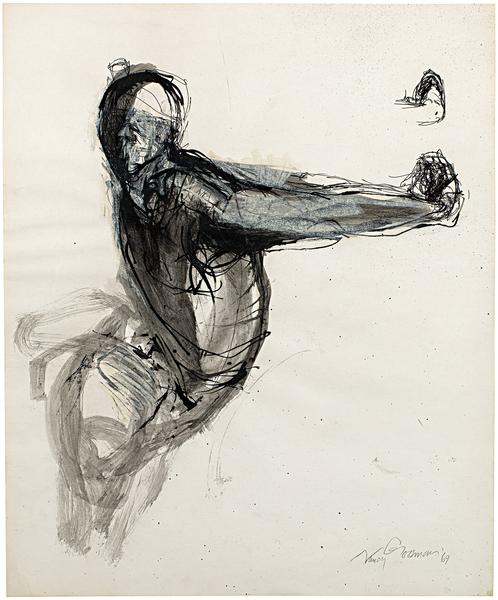 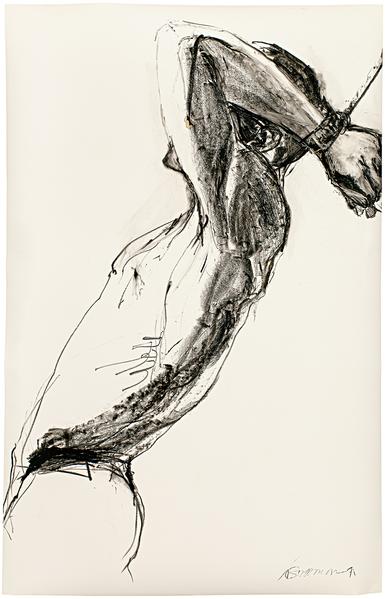 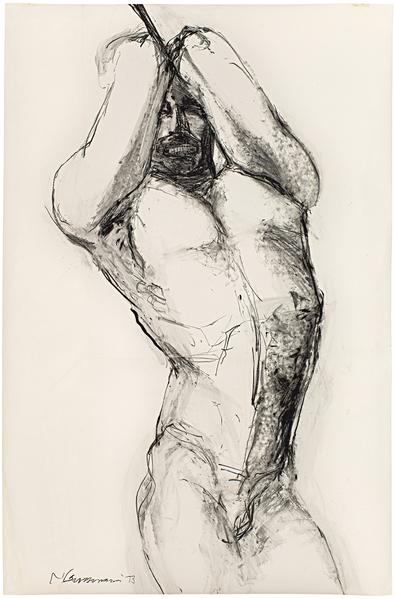 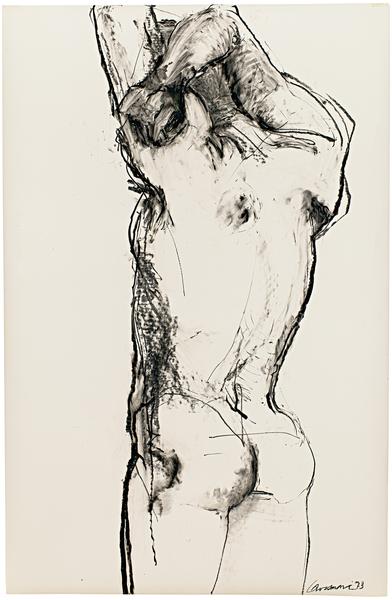 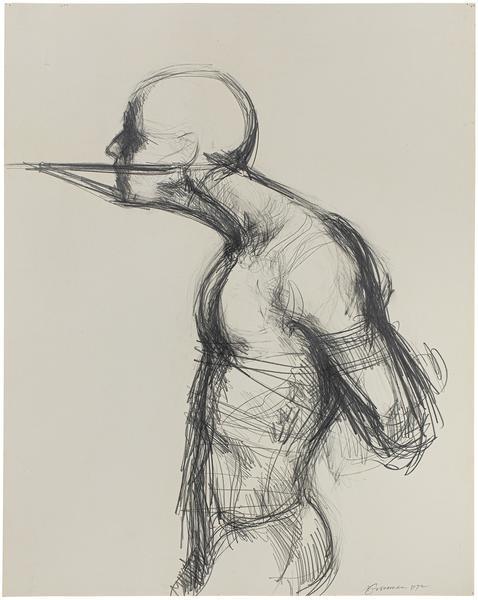 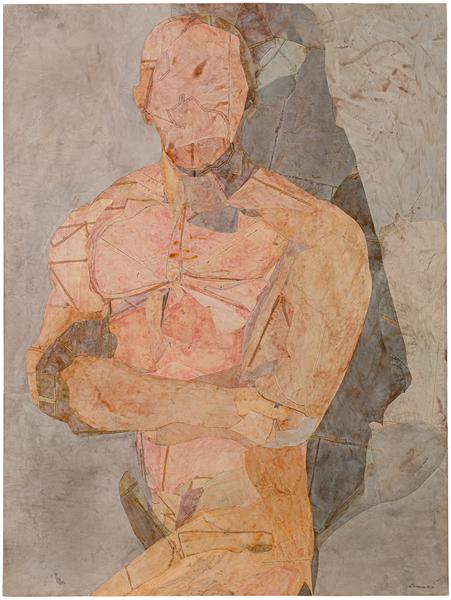 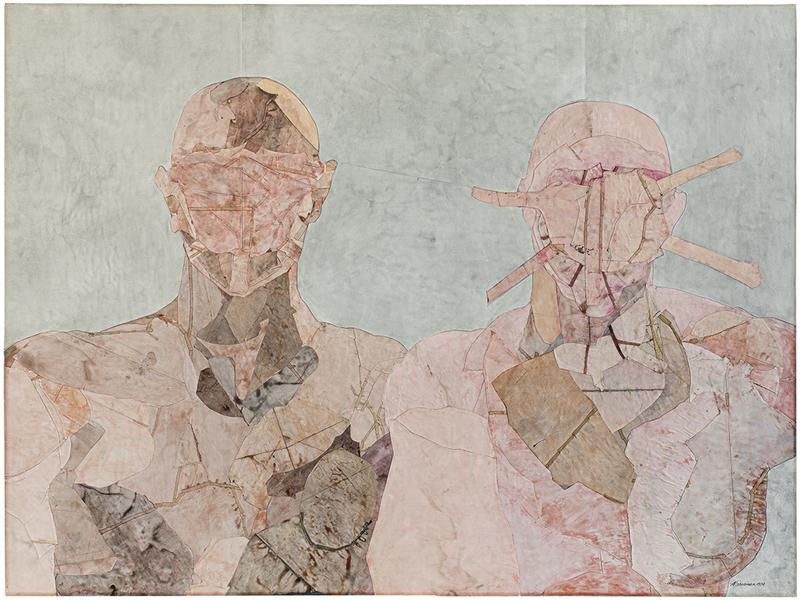 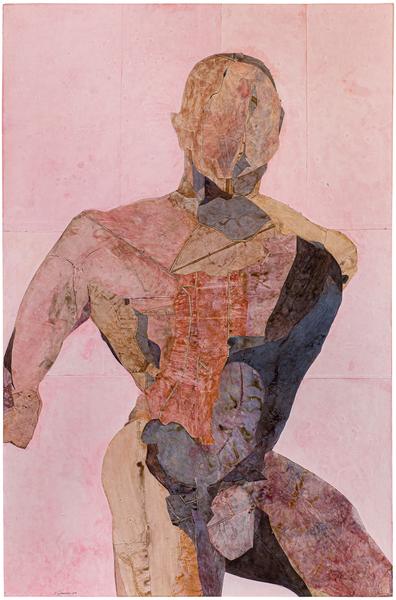 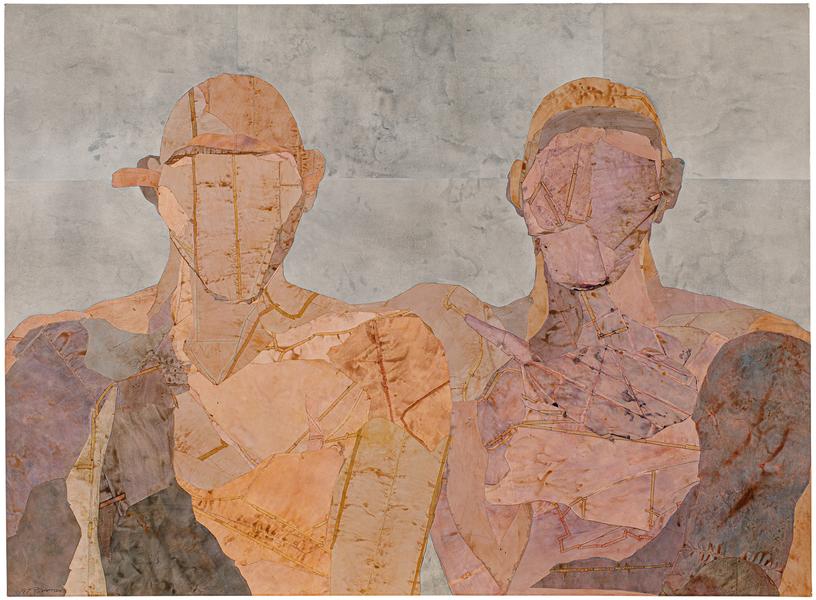 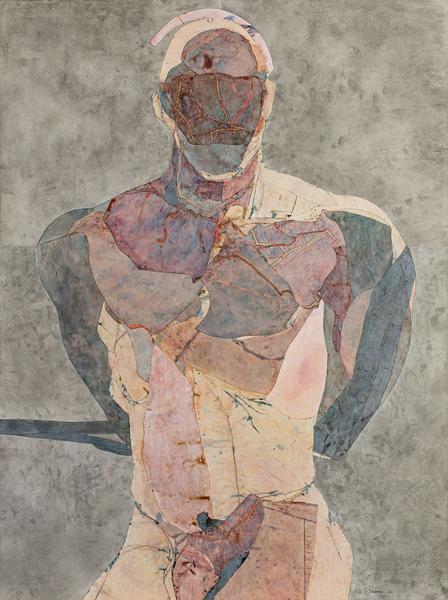 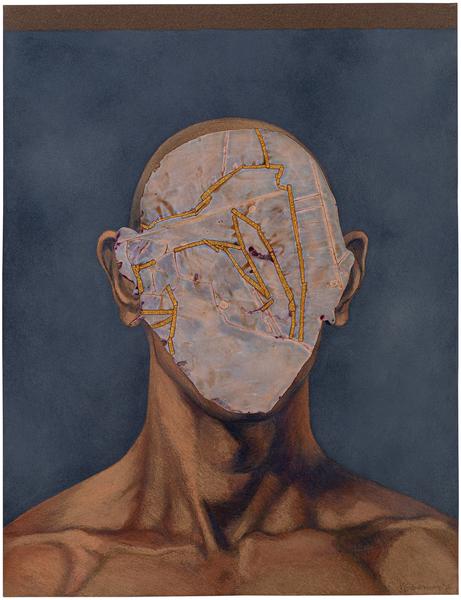 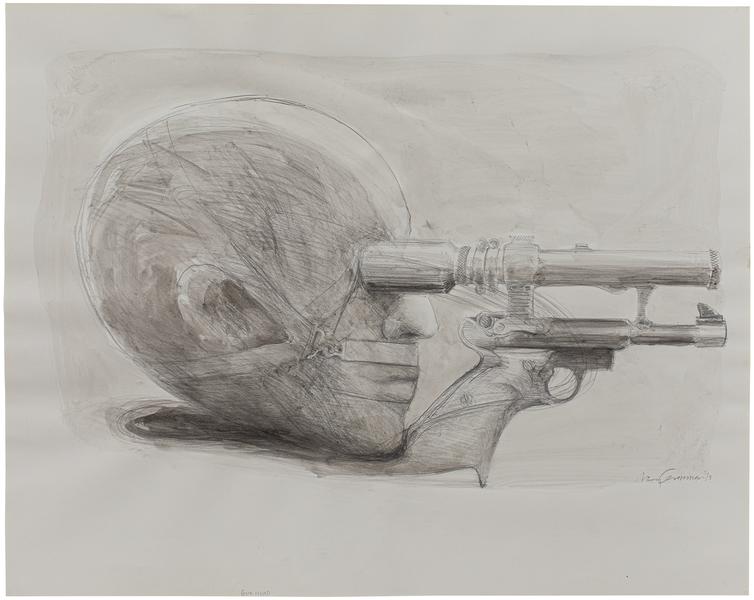 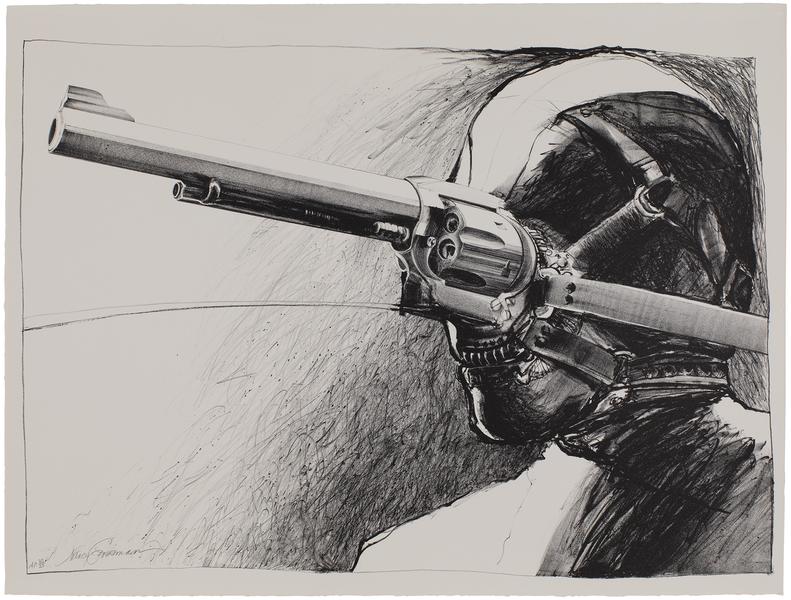 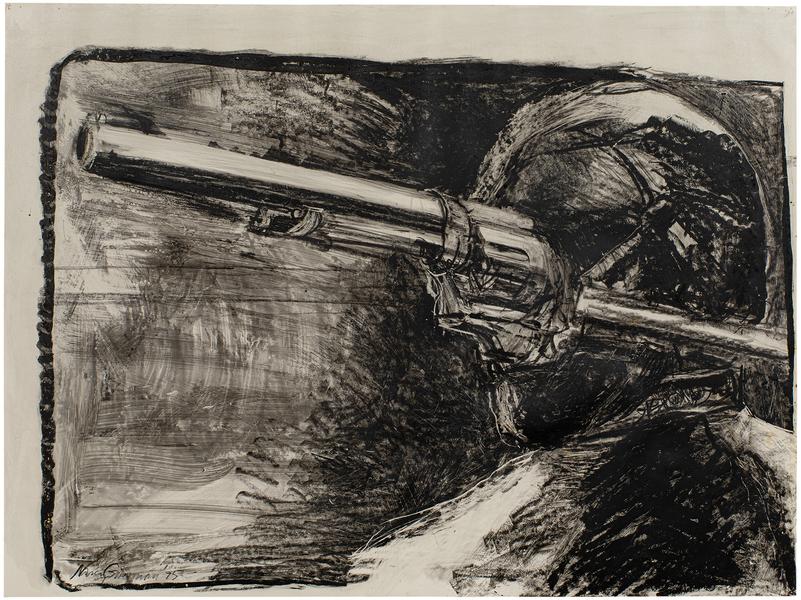 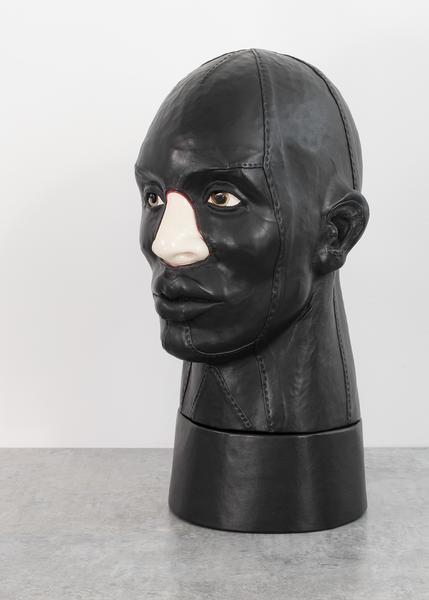 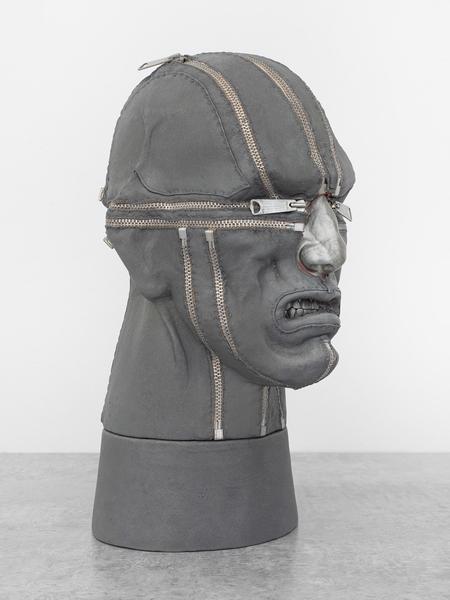 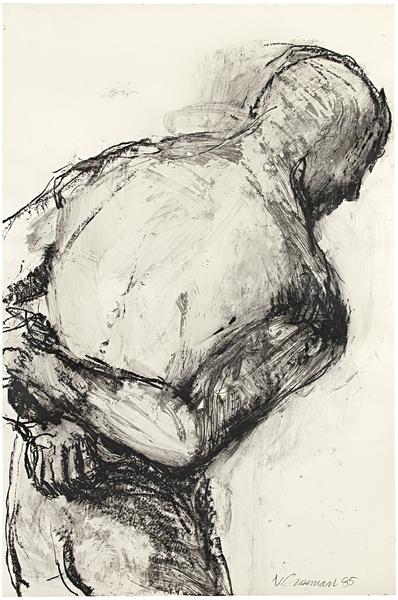 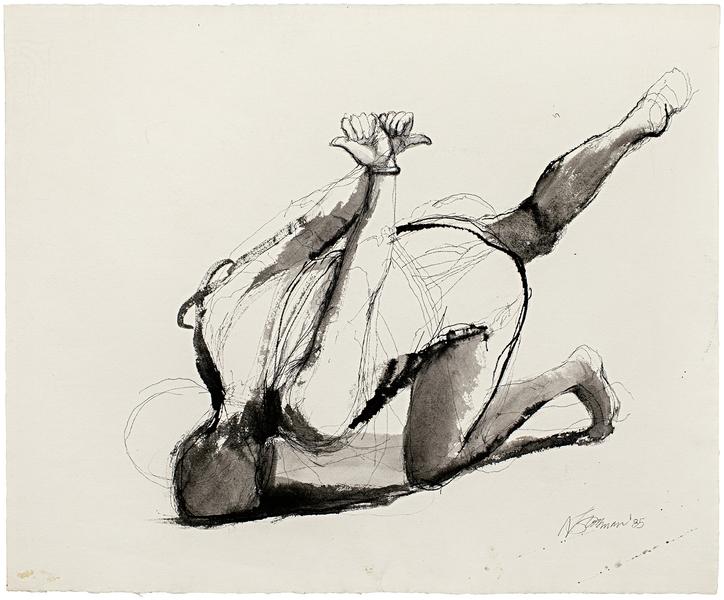 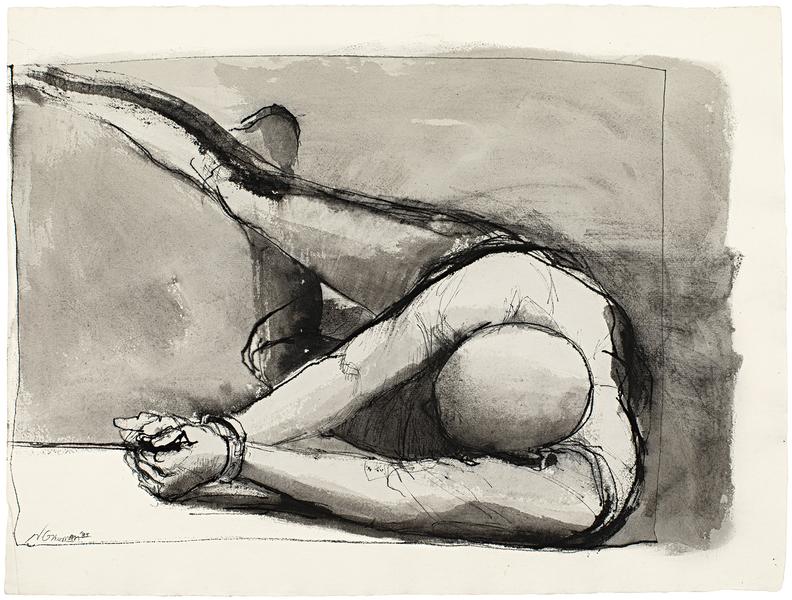 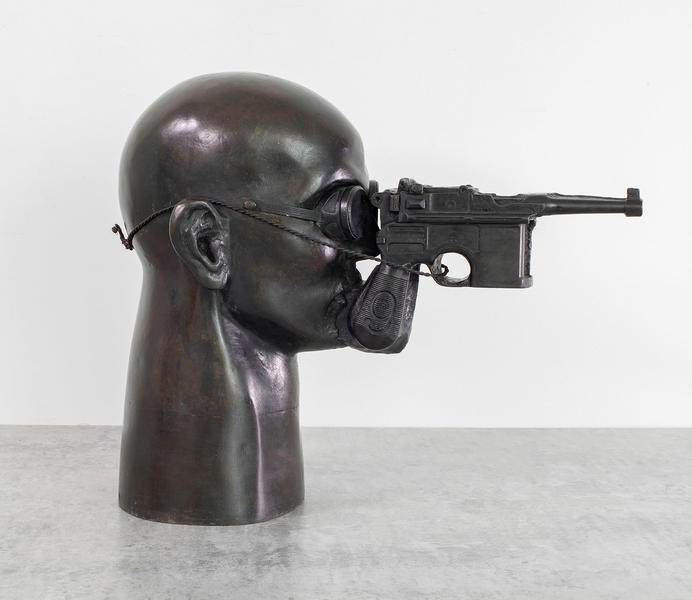 Michael Rosenfeld Gallery is pleased to present at Frieze New York 2022 a solo exhibition of works by Nancy Grossman (b.1940) that focuses on her oeuvre-spanning engagement with the figure in sculpture, collage, printmaking, and drawing. Nancy Grossman: My Body will trace the major developments in the artist’s treatment of the human form, which she conceives as an arena where the intricately related themes of agency, otherness, vulnerability, and identity play out in both collective and individual terms. Using the body as a touchstone, the presentation at Frieze New York will survey three decades of Grossman’s figural practice, assembling a striking group of works that complement and expound upon an exhibition of the same title currently on view at Michael Rosenfeld Gallery.

Demonstrating the artist’s unique understanding of the figure, Grossman’s ink drawings of the early 1960s portray the body as a single, monumentally proportioned masculine form perpetually struggling against tethers both explicit and implied. Also on view will be works from Grossman’s series of dyed paper collages created throughout the 1970s, which depict men of herculean proportions in various positions of restraint. Grossman discovered that repeatedly soaking paper cut-outs in water and dye imbued the material with a weathered texture evocative of skin, especially when organized in a schema mimicking human musculature. This series was initiated in 1973, the same year Grossman began another body of works highlighted in the presentation, which feature leather-clad heads with guns strapped onto their faces; referred to as her “gunhead” series, the motif constitutes a potent format for expressing the violence humans inflict on one another, not only with literal weapons but with their words, gazes, or silences. Rounding out the presentation will be a selection of Grossman’s large-scale figure drawings from the 1970s and 80s that reveal the evolution of the artist’s masculine bodies, who exhibit increasingly colossal physiques—a trope she found ripe with allegorical possibility. Notably, the subjects of these works are uniformly anonymous, their faces obscured by hooded masks, shadows, or turned away from the viewer, augmenting the indeterminacy inherent to Grossman’s portrayal of the figure and rendering her compositions open to a variety of interpretations.

While much of Grossman’s work deals with the strictures and inadequacies of gender constructs, the artist comes at the subject obliquely, using her own unique set of symbols and metaphors: “Whenever I wanted to say something specific, personal…I would use a woman’s image,” she explains. “But if I wanted to say something in general, I would use a man. It’s as if man was our society. Yet I don’t feel I have to conform to a political identification although, naturally, I’m a feminist. But if we have to split hairs, I’m a humanist.”[1] This approach allows for a layered reading of Grossman’s figural works, permitting her subjects to be read variously as stand-ins for the viewer, the artist herself, or society as a whole. Her figures are often manifestations of an interior identity, emotional state, or a collective ethos she seeks to express in bodily terms. Paradigmatically, Grossman considers her leather head sculptures to be self-portraits, as she first created them during a time in her life when she felt isolated and vulnerable; exhibiting expressions alternately grimacing and detached, these sculptures manifest the barriers the individual creates to protect themselves from society’s conflicts, which, in turn, limits their capacity for self-expression.

“The body of work which I’ve produced in the last thirty years may simply revolve around my own body,” Grossman wrote in 1991. “But then I may be, for all intents and purposes, a Heavenly body or the Wizard of Oz.”[2] Invoking the cosmic perspective in which her practice is grounded, Grossman describes a guiding principle of the primary decades of her career in this poetic statement, which conveys the immutable status the human form holds in her oeuvre.

ABOUT THE ARTIST
A master of sculpture, drawing, printmaking, and collage, Nancy Grossman (b.1940) was born in Manhattan and grew up on a working farm outside Oneonta, NY. She demonstrated an advanced drawing ability from a young age, and after her family relocated their garment factory to Oneonta, she began experimenting with textiles while working as a seamstress for the family business. Grossman attended Pratt Institute in Brooklyn on a Regents scholarship, earning her BFA in 1962. There she studied under the painter Richard Lindner, who became an important friend and mentor. In 1964, Krasner Gallery in New York City mounted Grossman’s first solo show. The artist’s work of the early- to mid-1960s is thoroughly interdisciplinary, encompassing collage, expressive figurative works on paper and canvas, and a group of abstract leather and metal assemblages. In 1968, Grossman created the first of her iconic leather head sculptures, which drew widespread attention and acclaim; she would continuously expand the series throughout the next twenty-five years. By 1970, she had been featured in four more solo shows and Cordier & Ekstrom Gallery had taken on her representation. Throughout that decade Grossman expanded her practice to include both abstract and figurative paper collages, figurative works on paper and a small body of abstract, freestanding sculptures. The artist continued to regularly exhibit new work throughout the 80s and 90s, with solo shows at Barbara Gladstone and Terry Dintenfass Galleries in New York City. In 1997, Michael Rosenfeld Gallery became her exclusive representative. Since then, the gallery has mounted five solo exhibitions of Grossman’s work and featured her in numerous group shows. Grossman is the recipient of a Guggenheim Fellowship (1965) and has been the subject of two institutional retrospective exhibitions for which accompanying monographs were published; the first was mounted at the Hillwood Art Museum in 1990 and curated by Arlene Raven, and the second, curated by Ian Berry, was held at the Frances Young Tang Museum in 2012.

Visit Michael Rosenfeld Gallery in Booth D10.
Meet and Greet with the Artist Friday, May 20, 5–7PM.