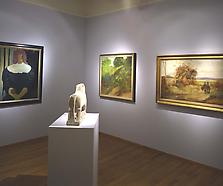 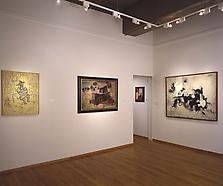 Lois Mailou Jones grew up in a middle-class Boston family. As a teenager, Jones spent summers in Oak Bluffs on Martha’s Vineyard, where she met future Harlem Renaissance writer Dorothy West and many other intellectuals. After developing an interest in African art in high school, Jones attended the School of the Museum of Fine Arts in Boston, where she won the Nathaniel Thayer prize for design and earned her degree with honors in 1927, the same year she also received a certificate from the Boston Normal School. Jones won a scholarship for graduate study at Designers Art School in Boston and then became a free-lance designer. In 1930, she joined the faculty at Howard University, where she stayed until her retirement in 1977. A founding member of the art department, Jones taught painting and watercolor for forty-seven years, and in 1962, she inaugurated regular European tours for Howard students. A sabbatical and yearlong fellowship in 1937 enabled Jones to study in Paris at the Académie Julien. There, she created numerous images of the city and completed her famous painting of African masks, Les fétiches (The

Fetishes). Jones also traveled extensively, and her journeys are reflected in her work. In 1953, she married Haitian artist Louis Vergniaud Pierre-Noel, and in 1970, Jones received a grant from Howard to travel to Africa and document the work of contemporary artists. During her long career, Jones’s talent was recognized in many ways.  She received an Honorary Doctorate of Humane Letters from Suffolk University, Boston and honorary degrees from several other institutions. She was elected Fellow of the Royal Society of Arts in London, honored by President Carter (1980), and in 1996, she became The Studio Museum in Harlem’s Artist of the Year.  In her lifetime, Lois Mailou Jones treated an extraordinary range of subjects—from French, Haitian, and New England landscapes to sources of and issues in African American culture—and although her work varied from decade to decade, the interest in color and composition that she developed early in her career as a textile designer remained consistent. In 1994, Pomegranate Press published the monograph The Life and Art of Lois Mailou Jones by Tritobia Hayes Benjamin.